﻿﻿﻿﻿Cosmo and Ling have been having a blast with some crinkled up paper (thanks, Katnip Lounge for the fantastic idea!).
﻿﻿
﻿﻿﻿﻿
﻿﻿Meow-me's babies are 8 days old!  How time flies.  They have been gaining weight steadily and Meow-Me is a superb mummy.  When Meow-Me comes out of the cage to stretch, I bring her babies out as well so they get some fresh air.  I find it really strange that although being a stray, Meow-Me seem very comfortable with my husband and I.  She has absolutely no objection to me handling her babies.

Wordless Wednesday : Ahhhhh.....Such Is The Life Of A Cat 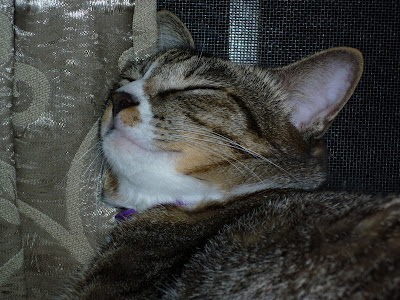 Kitten 1 was ginger coloured but was rather weak and it could be because it was born breech.  Although it was nursing when I left them at 3am, I found that it did not make it through the morning.  RIP little one...
﻿﻿

Kitten 2 was a fiesty little one.  It's tri-coloured which makes me think it may be a female.  Kitten 3 is pure white with a black tail (similar to the cat that I think may be Meow-Me's father).  Perhaps she was tired, but Meow-Me pretty much ignored this kitten immediately after giving birth.  The poor little thing was trying to reach the nipples but couldn't do so as Meow-Me had her legs on the cord which was still attached to the placenta.....

I decided to move the placenta closer to Meow-Me and she looked in disbelief that there was more!  But she prompty ate it and proceeded to clean Kitten 3.
﻿ Thank you everyone, for the positive vibes.  The birth went smoothly and Meow-Me is a good mummy to her 2 babies.

Whisky, Cosmo and Ling have been very curious about the newcomers and have pushed open the main door to visit Meow-Me and her babies in the cage.  Everytime I try to take a photo of this, they run back into the house!
Posted by Whisppy at 1:47 AM 12 comments:

Meow-Me Escapes! And A Visitor

As Meow-Me seemed content just lazing about at the fenced up portion of our porch, we often let her out to stretch.  Saturday morning was no exception.  After her breakfast, we left her outside to stretch while we had our breakfast.  15 minutes later, I looked out and she was GONE!

We rushed out to look for her in the drizzle, hoping she hadn't gone far.  We called, we jingled the food container, we looked in the drains, at the back alley but there was no sign of her.  Hubby decided to walk further while I went back hoping she had come home but nothing.  Then Hubby came running back, waving his hands frantically.  He had found her!

The little girl was in the deep drain, looking a little disappointed that we managed to find her.  We had to climb in the drain, corner her and finally catch her in the most indignified manner.  I'm surprised she didn't scratch my eyes out.  She's only allowed out under very close supervision now.

﻿While I was feeding her dinner on Sunday night, we had a visitor!  It's a cat I've not seen before.  The cat was very friendly, loud AND starving.  The visitor allowed me to stroke and even carry him / her.  I can't make out if it's male or female but it's fur is nice and clean so I think it might be a lost cat.  I gave it some biscuits which it gobbled up.  Poor thing.

Since Meow-Me (her temporary name) came to stay at our porch, I've been very busy getting her settled.  Cosmo and Ling are very curious about Meow-Me and look at her from a safe distance.  I'm pleasantly surprised to observe that they seem to think they had better stick together against this newcomer as they have stopped fighting with each other (this is a good thing, of course!).
﻿ ﻿As for Meow-Me, I gave her a quick bath today (weather was nice and hot) as she smelt pretty bad, her fur was dirty and sticky from her life on the streets plus she couldn't groom herself (especially her bottom half) because of the size of her tummy.  She was very well behaved and enjoyed being rubbed dry (she loves a lot of attention). ﻿
﻿Thank you to those who responded to my SOS on caring for Meow-Me.  I appreciate it very much!  Her babies have yet to make their appearance physically but have been kicking up a storm in their mummy's tummy!  Continuous vibes for a smooth birth (when it happens!) is much appreciated!

I've not been visiting of late as I was occupied with Meow-Me but now that she has settled in, I'll be coming round!  I can't wait to read about what you guys have been up to!
Posted by Whisppy at 3:11 AM 9 comments: