Remember the stray cat who started Cosmo and Ling fighting?  Well, on Friday morning, I heard cats fighting at the back so I went out to investigate.  And I saw her in the deep drain, while the big bully was busy yowling at another cat.  The poor little thing was just sitting there, and didn't even move when I approached, either from fear or from being so heavily pregnant.  Anyway, long story short, she was starving so I gave her some stinky goodness (tuna) which she gobbled up and thanked me by letting me put her in a carrier without a fuss.

I suspect she is the offspring of the big bully (they have the same face) and probably very young, less than a year old.  And she is very close to giving birth.  She is also very friendly and has settled nicely in the cage I've put up at our porch.  She makes no attempt to escape when I let her out for a little exercise.

We're going to spay her once her babies are weaned, then try to rehome her and her babies.  I was thinking of giving her a name so she can start getting used to it.  Any suggestions?

And how are Cosmo and Ling taking this?  Well, they is no noticeable change in their behaviour and I'm happy to say they have remained civil to each other and there's been no fighting for a while now (and fingers crossed it stays this way!).

I have no experience with anything pregnant and have been reading up as much as I can.  If anyone has anything to share, please do leave a comment.  It would be much appreciated.  Meanwhile, do send vibes for a smooth birth!
Posted by Whisppy at 1:43 AM 14 comments:

More Squabblings, A Scare And A Funeral

Almost 2 weeks have gone by since Cosmo and Ling started fighting.  It's a constant battle to keep the peace between them but we are getting good at identifying the first signs of hostilities and in preventing it from escalating.  They are alright most of the time though we don't find them playing or grooming each other as much as before.  There is a lot of butt sniffing, though.
On Monday night, Ling refused to sleep with us so we let her out.  The next morning, when Hubby went to the study room, Cosmo bumped his feet as usual then before he knew what was happening, they were chasing each other, pee everywhere!  We don't know what triggered that fight.....but we kept them separated all day and they were okay with each other by dinner time.
There was some tension between them Tuesday night so we made Ling to sleep with us (and she didn't protest).  When I let her out in the morning, Cosmo came in to sleep with me.  A little later, I found Ling on the floor, glaring at Cosmo.  So I quickly took him outside before he noticed it.  Breakfast helped diffuse the situation and everything seem fine for now.  It does seem to me that Ling might be a tad possessive over what she deem as hers (including us)?﻿﻿﻿
﻿﻿﻿Late Saturday night, as I was saying good night to Whisky and rubbing her face like usual, I noticed a bump next to her left eye, seemingly having appeared overnight.  We took her to her vet on Sunday morning and he aspirated the lump which yielded nothing alarming.  He wasn't sure what it was, but could tell us it probably wasn't the dreaded "C" (my previous dogs had both passed away from cancer and lumps of any kind frighten me).  He wants to see her again in a month's time.  Meanwhile, I take daily measurements of the lump and am very happy to see that it seem to be getting smaller.  I hope it would be all but gone before the follow up appointment.
﻿
Gumby, our goldfish, has had bladder issues since the day we got him.  He always look so happy despite having problems with his buoyancy, eating and swimming excitedly, albeit erratically, when we approach.  However, over the last week, he had gotten very lethargic, unable to eat, and had bloated considerably.  Over the last two days, we noticed his scales were sticking out much like a pine cone.  He had what is known as "Dropsy" where the prognosis is very poor.  After much discussion, we made the heart wrenching decision to euthanise him humanely on Tuesday night.  Rest in Peace, little Gumby.  His pal, Bumby swims forlornly in the tank now.  It's heart breaking.
Posted by Whisppy at 1:15 AM 9 comments: 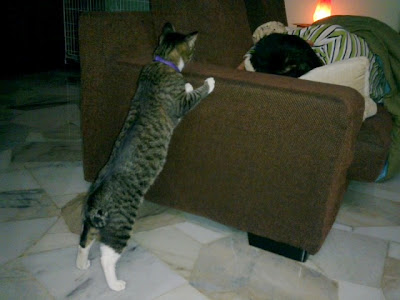 Mummy : Poor Daddy was sick and decided to sleep on the sofa to avoid the air-cond in the room.  I DID NOT kick him out of the room!  Hee hee.  :p
Posted by Whisppy at 12:32 AM 9 comments:

OH NO! Not Again!

Last night, Cosmo and Ling were sitting by the back door as usual while I was doing the laundry.  All of a sudden, there was a horrifying YOWLLLLLL so I ran to see what was going on.  Cosmo was all puffed up and Ling ran off.  I looked out and saw a new stray cat (our back door leads directly to the back lane).  Cosmo was yowling at the stray cat.

Ling was rather agitated from this (she had gone upstairs) and hissed when I approached her.  She calmed down when I sat with her and everything seem better.  They even ate dinner together!

Later, Cosmo was playing with me on the bed when he suddenly stopped, and then started to puff up slowly while staring at the door.  When I looked, Ling was at the door, also puffing up.  Before I could stop them, all hell broke loose, yowling and screaming along with the pee fountain (this was at 3am!).

I managed to shut the door when Cosmo ran out while Ling stayed with me for the night.  There is no change in the aggression today.  I've had to keep them separated (one stays in the room with me while the other gets the rest of the house and after a few hours, they switch places).  I did bring Cosmo into the room to sit on my lap (the both of them are their normal self when alone with me) while Ling was on her scratching post and she was furious.  Although I made sure they did not stare at each other, Ling still got into a massive hissy fit and Cosmo who was quiet at the beginning, started to growl then hiss.


﻿
At the moment, Cosmo is sitting right outside the door, mewing to come in and does seem like he wants to make up but he reacts when Ling starts growling then hissing in addition to the staring (who can blame him!?).  ﻿I will keep them separated for the time being.  I've read quite a few articles on redirected aggression but was wondering if anyone has had any on hand experience with it?  And how you dealt with it?

Here's some information on feline redirected aggression.
Posted by Whisppy at 6:22 PM 9 comments: 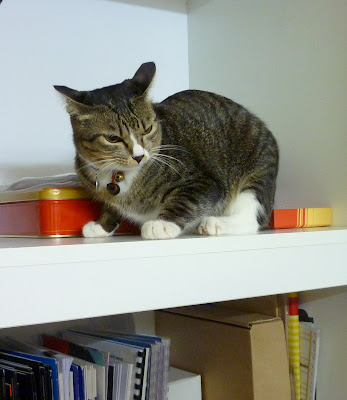 A Walk In The Park

We brought Whisky for a walk at the dog friendly park on a lovely cool windy Sunday.  We had such a lovely time and can't wait to do it again!  We're hoping to make this a weekly affair.....

Dinner time for Cosmo and Ling..... 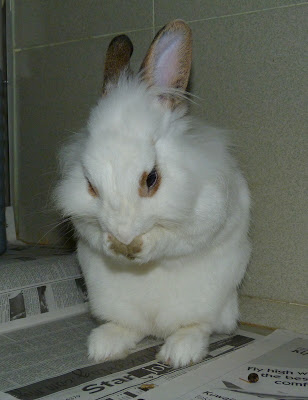 The Bed : Whisky vs Ling

The cats love Whisky's afternoon bed and here is Ling trying to get Whisky out of the bed.....will she succeed?