We Have An Important Announcement! 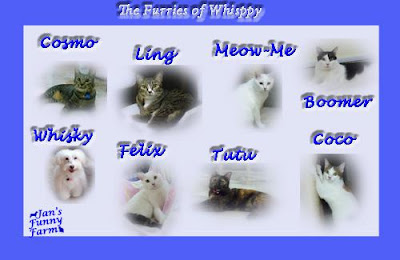 We, the Furries of Whisppy have been interviewed by the wonderful Funny Farmer Felines for their column on Mousebreath! Yeay!

As you can imagine, getting the 8 of us to sit together for the interview was quite a task but we made it. Boomer had to sit on the recliner so he could put Tutu against his strong chest and hold on to her...TIGHT! She wanted to eat all the tidbits we had put out for the Funny Farmers!

We had a great time doing the interview and we hope you'll go over to read it and tell us how we did!
Posted by The Furries of Whisppy at 5:45 PM 55 comments:

Who's Been A Good Girl This Year?

Santa got caught in a terrible traffic jam due to the thunderstorms but it'll be Christmas all over again once he gets here!  :)
Posted by The Furries of Whisppy at 11:22 PM 43 comments:

Is Christmas Here Yet?

The Holiday Season Is Here

Green Green Eyes of Home And An Award

We would like to thank Colehaus Cats for awarding us the Blog of the Year 2012 award. This award allows the recipient to collect STARS! Every time someone passes the award to you, one star will get lit until all 6 stars are lit. Isn't that just cool?

We have 2 lit stars because the kitties from Feline Purrspective, gave us the award too! We can't wait to get all 6 stars lit.

We'll like our friends to get their stars lit so here goes...

There's never a dull moment with Tutu around. If I don't see (or hear) Tutu after about 8 minutes, I can almost bet she's up to some kind of mischief...
Posted by The Furries of Whisppy at 8:26 PM 57 comments:

Last Monday morning, November 19, 2012, I gave Bernie his favorite veggies for breakfast which he was interested in, giving me hope. But watching him struggle to eat them made me realize it was indeed time. So I cuddled him and told him Daddy and I loved him dearly (Daddy was away on a business trip).

The vet was very busy that morning so we went to the back and cuddled. I had him in my arms as the vet helped Bernie hop off to the Rainbow Bridge, whole and well once again. His physical passing was very peaceful.

I brought him home and called the guy who does the cremations. He was cremated that very night and his ashes returned the next day.

We would like to thank all our furriends who left their comments on our previous post about Bernie. We appreciate your thoughts and prayers very much. We miss Bernie, especially when we see his favorite veggies and bananas...but we know he's now having a grand time at the Rainbow Bridge along with his pals. We love you, Bernie!
Posted by The Furries of Whisppy at 1:50 AM 50 comments:

Bernie has been through one health issue after another but he has never let it get him down. He lost his sight to cataracts at just 3 years young, then he had to have his left foot amputated on May 25, 2012. In October, he started dragging his remaining hind foot and chewed off his nails (just like with his amputated foot). About a week ago, I discovered a huge hard lump next to his right eye. But we kept going because he never stopped loving his food, even on the same night his foot was amputated. He's an amazing, brave boy!

Bernie, hubby and I had a little chat and Bernie told us that when he stopped eating, that would be the sign he was ready. Meanwhile, we were to spoil him rotten and give him his favorite bananas and veggies. He stopped eating his pellets on Saturday. Sunday afternoon I gave him a veggie leaf and he only managed a bite or two. His drooling had also increased. It was time.

Monday morning (we are around 12 hours ahead of most of our friends in America), I will bring him to the vet to help him cross the Rainbow Bridge...unless a miracle happens tonight and he starts eating again! Do keep him in your thoughts and prayers for a smooth transition.