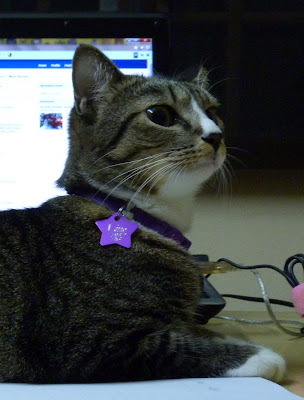 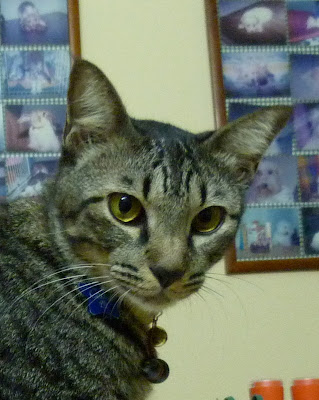 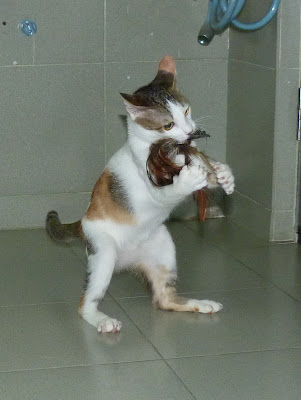 Whisky in a Thundershirt

After reading about the Thundershirt from Oskar and checking out more reviews, we finally found a shop that sells it.  The Thundershirt supposedly helps calm dogs during fearful situations such as during a thunderstorm or fireworks.  The monsoon season is about to arrive AND we expect fireworks during the end of Ramadan so we thought we'll get one for Whisky (she is terrified of thunderstorms and fireworks).

So we brought her to the shop to get the right fit.  She's in between the XS and S so the instruction said to get the smaller size which we did.  It needs to be snug for it to be effective.  As Whisky is used to wearing a baby tshirt to sleep, she didn't object to the Thundershirt.
That night, it rained with thunder and lightning and amazingly, Whisky didn't shiver nor did she paw to be carried.  She followed me around, looking worried but not terrified.  :)  Now, we can't wait for the fireworks to see if it helps her too.

You can read more about it here : http://www.thundershirt.com/

Isn't he a handsome cat?  He doesn't come near us but we see him quite often, lounging at the back neighbour's garden.  I'm just happy his mange has cleared up and he looks healthy and is no longer fighting.
Posted by Whisppy at 1:59 AM 20 comments:

We had brought Whisky out Sunday morning to get her a present (more on that in the next post).  When we got home, we found that somecat wasn't bored anymore.

Thankfully, both Cosmo and Ling had no cuts on them.  I knew it had to be Cosmo since he was a little hyper in the morning and was jumping around in the kitchen before we went out.  Thank goodness Whisky was with us or she might have run into the kitchen to investigate and cut herself!
Posted by Whisppy at 12:51 AM 20 comments: 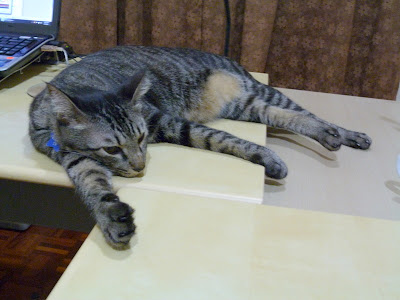 After being neutered, getting an injection for the mange, spending a night on drips at the vet, AND finishing 2 helpings of kibbles, I brought Mr Pure White back to his spot and off he went!  I have not seen him since and I can just hope that he will be okay.
﻿
Mr White left after finishing the breakfast I gave him.  He had spent 2 nights in Boomer's cage.  I've since seen him hanging out at the back neighbour's garden, stalking butterflies and basically looking very relaxed.  His mange seem to be clearing up as well.

﻿
After scrubbing and disinfecting Boomer's cage, the entire porch and driveway, Boomer was finally allowed out again. And of course, now that he is outside, he wants to come in.....
﻿
Whisky was also happy to be out again to fertilise her garden.  Heehee.
﻿

Mr White Stray's neutering procedure went smoothly and he is now recovering in Boomer's cage.  He is eating up a storm and basically doing very well.  He allows me to pet him and even to hold his food bowl while he eats. But I'm pretty sure he'll stay away once I release him.  I plan to release him after breakfast tomorrow.

Last night, I sat by the back door, hoping to trap the black stray.  After several hours, he walked right into the trap and he was in custody.  But wait...uh..it's a black cat, but I didn't think it was the RIGHT black cat.  I brought him out to the porch, scruffed him to get a better look and got hubby to help with the identification and even he felt it was the wrong cat.  Since we already had him in the carrier, we decided to keep him overnight and get the vet to confirm it in the morning.  So off we went to the vet and he confirmed it was a castrated male.  Ooopss.  Heehee.

I brought him back to release him at the spot where I trapped him and spotted a white cat sitting forlornly by the side of the road, a few houses away.  After apologising and releasing Mr Black, I went back to check on the white cat and it was still there.  So I parked the car, got the towel and carrier, went over and picked him up (I got lucky, I suppose) and went back to the vet.  It's an intact male, flea infested (so rather anaemic), very thin, has mange, no teeth except for his canines and dehydrated.

The vet said it was okay to neuter him (and treat the mange) so the surgery went ahead.  The vet just called to say the surgery went well, they will keep him overnight with IV drips and I'll pick him up tomorrow morning to release him back at his spot.

As for the mange, thank you, Lucy for your link.  It had a lot of helpful advice. The vet said that 2 jabs of ivermectin 2 weeks apart will normally fix the problem.  However, if it's not possible to recapture the stray, 1 jab is better than none (it only kills the adults so the second jab is to kill the newly hatched adults).

I am still trying to capture the RIGHT black stray.

PeeEss / Mr White Stray has been neutered and is doing very well.  Mummy will update everyone later.  Now if you don't mind, I want to catch up on my Zzzzzz.
Posted by Whisppy at 11:12 PM 9 comments:

After many months of trying to capture Mr White Stray failed (which resulted in the births of Meow-Me and subsequently Coco and Felix), I decided to borrow a trap that was designed to capture civet cats and feral cats. It's a larger version of the mouse trap.  I fried a fish for bait.

We set up the trap behind our house during Mr White Stray's dinner time and waited (my next door neighbour feeds him).  After an hour, hubby saw him approach the trap and both of us watched, hearts beating fast...he walked around the trap then walked right into it!  Snap!  The door shut.  But not firmly enough and he got away. I was absolutely devastated as I knew he would probably NEVER enter the trap again (he's a very smart cat).

Today, I tried again.  This time, I set up the trap nearer to where he likes to take his afternoon siestas.  When he finally emerged (I was hiding in the drain), he took a look at the trap, then he spotted me, and gave me a look of disbelief.  "You actually expect me to be that dumb as to enter the trap AGAIN?  What do you think I am?  An idiot?".  Sigh.

I went to speak with my neighbour who usually feeds him and she said he does go into HER cat's cage to eat her biscuits AND allows her to touch him.  I asked if she could PLEASE please help me trap him because he looks like he has mange and he will probably end up spreading it to every cat, especially hers, since he likes to hang out at her place (she says her cat recently developed a bald spot on her ear so I asked her to get it checked out).  She said she'll try.

As I was grooming Whisky, I received a phone call.  It was my neighbour! She GOT him!  She got scratched when she shoved him into the carrier, but she GOT HIM!  I went over to pick him up and his neutering appointment has been set for tomorrow at 10am.  We'll get him treated for mange (if he has it) and I'll keep him for a few days before releasing him.
Call me paranoid, but I'm so afraid he'll somehow escape so I put his carrier in another carrier...just to be sure.
Does anyone have any experience with mange?  How do I prevent my cats from getting it?
Posted by Whisppy at 7:43 PM 18 comments: